Aoba has two brightly-colored wings. It has a large red feather on the top of its head and a long, colourful and amoured tail on its hind-end. It holds a jewel-like sphere at the end of the tail matching its jeweled headband, shoulders, necklace and anklets.

Stats taken from the official BradyGames Spectrobes: Beyond the Portals game guide and values seen in-game. 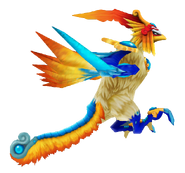 Model of Aoba from Spectrobes: Origins
Community content is available under CC-BY-SA unless otherwise noted.
Advertisement