Komainu is solely based off of ancient Japanese guardian lion-dogs called Komainu. This can clearly be seen in the thick lips and large eyebrows. Komainu ears are curly, soft, and very large in comparison to the head. There are three stripes that start at the top of the head. The two opposing stripes go to base of the skull while the middle stripe stretches to the rear. Additional patterns are located on the lower back, rump and haunches.

In Spectrobes Origins, several novelty versions of Komainu are available: one with a patchwork appearance, one with a skull shirt, and one wearing a football jersey can all be unlocked via the Card Input system. These Komainu become normal Komanoto when evolved. Additionally, a silver Komainu is unlocked after Krux has been defeated and the game has been saved, and a gold Komainu can be obtained by completing the lab system Database. Unlike the others, these Komainu retain their appearance throughout their evolutions.

In the webisodes, Komainu is the first Spectrobe that's unearthed in the series. The Komainu is one of the main characters of the webisode series, appearing in every webisode. At the beginning of episode 1, a Komainu is seen hurtling through space before landing on a barren planet and sleeping inside the earth.

Later, in episode 5, Rallen excavates the Komainu, and in episode 6 it is awakened. For the rest of the series this Komainu tags along with Rallen and Jeena.

In episode 8, it is revealed that while they were traveling Rallen had excavated a second Komainu; after using the Card Input machine Rallen sees that the Komainu, at that point in the incubator, is ready to evolve; Rallen cracks open the encasing surrounding it, and the Komainu evolves into a Komanoto. This Komanoto is later seen battling alongside Rallen in episodes 9 and 10.

Komainu is the first Fossil Rallen receives in Spectrobes. It also serves as the very first Search Spectrobe in all three games and is thus available from the start of the game. 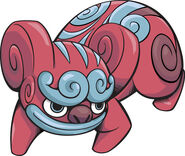 Official artwork from Spectrobes: Beyond the Portals 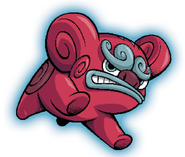 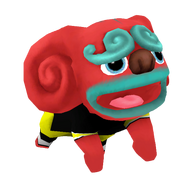 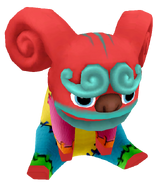 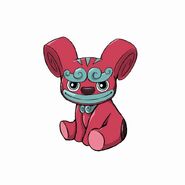 Japanese Spectrobes: Beyond the portals artwork

This model viewer does not work in mobile skin, please view this page's desktop version and enable Javascript.
View list of models

Community content is available under CC-BY-SA unless otherwise noted.
Advertisement