Rallen is the main protagonist of the Spectrobes series. He is a Spectrobe Master and junior officer of the Nanairo Planetary Patrol. His main allies are Jeena, his partner, Aldous, and Commander Grant. Rallen is known for his bullheaded, prideful personality and tendency to get carried away.

Rallen and Jeena are dispatched to Daichi to investigate an object that crashed into its surface. Rallen finds a hibernation pod with an old man sleeping inside. Next to the pod, he picks up a device which fits perfectly into the wrist of his suit. Before Rallen can return to the ship or find out what the device does, a menacing black vortex attacks him. Inside the vortex are monsters, which prove to be virtually immune to the effects of his weapons. Creatures pop out of the device on his arm, and with their assistance Rallen manages to defeat the monsters.

Rallen brings the device and the pod back to his ship, where the man awakens. His name is Aldous, and he came to the Nanairo system to search for Spectrobes. They are the only creatures capable of opposing the Krawl, the monsters in the black vortex. The Krawl had invaded Aldous' home system of Giorna, which as Jeena points out, was destroyed over fifteen years prior. Aldous grieves for the loss of his home, but since Nanairo is now threatened by the Krawl, he trains Rallen in the ways of the Spectrobe Master.

First, Aldous explains that the device Rallen found is a Prizmod. It can store Spectrobes for use in battle or for searching for minerals. Not everyone is able to command Spectrobes; it was lucky that Rallen is one such capable person. He also learns that his voice can awaken Spectrobes from fossils into Child forms. Rallen then begins his journey through the Nanairo System to stop the Krawl invasion.

The Nanairo Planetary Patrol has been picking up strange portals that have been appearing all over Nanairo. Rallen and Jeena decide to investigate this as they battle new Krawl threats to Nanairo such as the High Krawl Jado, Gelberus, Gronos, and Maja, and the mysterious leader of the Krawl, Krux.

Rallen and Jeena are travel through a portal which leads them to a new star system. This star system is being invaded by a massive army of Krawl, and Rallen and Jeena are able to end their threat using a new item called the Cosmolink, which, like the Prizmod from the previous games, can hold and summon Spectrobes.

Rallen has orange eyes and orange hair with a ponytail on the back. He wears a standard NPP (Nanairo Planetary Patrol) black and white uniform, which seems to have malleable plating made out of a material that provides armor-like qualities. He also has a small laser-cannon installed in his right arm.

After Commander Grant sees the Krawl threat for himself, he gives Rallen permission to use NPP Special Ops Weaponry, this gives Rallen access to his signature arm-mounted Blade.

In Spectrobes Origins, he and Jeena both have the Cosmolink equipped to their right arm, and the Cosmolink changes in color and pattern depending upon which weapon is selected.

With the Galaxy Sword

With the Galaxy Blaster 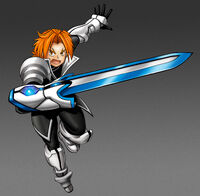 Add a photo to this gallery

Retrieved from "https://spectrobes.fandom.com/wiki/Rallen?oldid=24226"
Community content is available under CC-BY-SA unless otherwise noted.