Rydrake resembles a six-legged leopard-like monster covered in grayish-blue armor resembling stone carvings. It has two bladed wings with five talon-feathers each that it uses to fly at high speeds or slash enemies. On its tail is an axe shaped blade, with a smaller pike like one at the end. blade. It has four blade-like horns on its head, that seem to be made of membrane or fur. 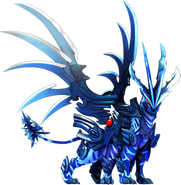 From the Japanese Spectrobes: Origins boxart 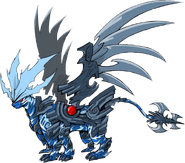 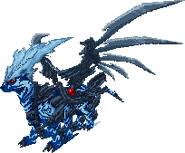 Model in Spectrobes: Beyond the Portals

In the Spectrobes: Beyond the Portals opening 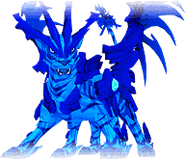 Card art for alternate Rydrake
Add a photo to this gallery
Retrieved from "https://spectrobes.fandom.com/wiki/Rydrake?oldid=24612"
Community content is available under CC-BY-SA unless otherwise noted.