As his name suggests, Samurite closely resembles a samurai. His most notable feature are the two blades protruding from his elbows. He has black skin that is covered in purple and red armor. 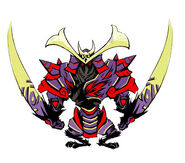