Spectrobes is a science fiction action role-playing game developed by Jupiter and published by Disney Interactive Studios on the Nintendo DS handheld console. Originally revealed at E3 2006 and touted as Disney Interactive's first original intellectual property, It is the first game in the Spectrobes series and the beginning of the Spectrobes franchise, branching into several other forms of media as well as spawning two sequels: Spectrobes: Beyond the Portals and Spectrobes: Origins.

Nanairo Planetary Patrol officers Rallen and Jeena are sent to the planet Daichi after receiving an alert that an object crashed onto the surface. Once on the planet, Rallen investigates the crash site and finds an object that fits on his glove as well as a man sealed inside a capsule, whom he and Jeena dub "Mr. X". Before they can investigate any further, however, a vortex shows up and envelops Rallen. Within the tornado are three creatures, though two more show up to aid him. Afterward, Rallen, still confused as to what happened, transports the pod back to the ship.

On the ship, the pod opens and Mr. X awakens. When inquired on his identity, the man reveals that his name is Aldous and that he is from the Giorna system. He then explains to them that the creatures that attacked Rallen are called Krawl, and that the object on Rallen's arm is his Prizmod, containing the only creatures that can battle the Krawl, the Spectrobes. From there, the three set off on a mission to stop the Krawl from destroying Nanairo.

These features can no longer be used, as the Nintendo WIFI connection has been disabled. The Great Black Holes are still available in-game.

The Download feature used to allow the player to use DL (Downloader) Points to purchase video clips, special Spectrobes, custom parts, minerals, and more. The first time the player used the Download system, he or she was awarded 30 free DL Points. Every following week, the player could obtain ten more DL Points by accessing the download system on Friday, or else the points would not be saved.

The Upload feature allowed players to upload their Sequence Battle scores from the seven Great Black Holes scattered on the various planets and moons in the Nanairo star system. In Sequence Battle, the player must win a certain number of Krawl battles to obtain the prize: an Evolve Mineral or a special Geo. Before beating the game, only one Great Black Hole is available to the player: in the Area 2 Desert of Nessa. Here, the prize is always an Evolve Mineral. After beating the game, six more Great Black Holes appear throughout Nanairo. The rest of the Geos may be obtained from these black holes.

Spectrobes received mostly mixed reception from critics at release. The game currently maintains a 63 on Metacritic[1] and a 63.41% on GameRankings[2]. IGN gave the game a 6 out of 10, writing off the game's art style as "generic anime" and the battles as "simple" due to bad AI, as well as the overall difficulty for being easy, though they praised the game's graphics and soundtrack. While they also praised the incubator and card input mechanics, they criticized them for not being developed enough, and criticized the limited Wi-Fi functionality for not offering online battles.[3] Gamespot also gave the game a 6 out of 10, praising the game's soundtrack and good use of the DS' dual-screen capabilities. However, they criticized several aspects of the gameplay, dismissing the battles as "trivial" due to the "overpowered battle mechanic" and stating that, while fun at first, searching for minerals and fossils "quickly becomes monotonous." They also criticized the "brain-dead characters and by-the numbers storyline," overall stating that the game "feels as if it were devised in a boardroom by people more interested in turning a profit than making a game."[4]

Despite its critical ratings and simply being written off by several as "a Pokémon ripoff"[5], the game was considered a commercial success; about one month after launch, it was expected that 700,000 copies would be shipped worldwide by the end of April.[6] Spectrobes was the best-selling third-party title in March 2007 in North America[7], and, according to NPD sales data, was the seventh best-selling title overall, at 165,000 units.[8] Spectrobes was also the sixth best-selling Nintendo DS game in 2007 in North America.[9] However, Tim FitzRandolph of Disney Interactive Studios would state later that the game underperformed in the Japanese market.[10] By the time of the launch of the sequel, the game had sold over one million units worldwide.[10]

The popularity of the game also spawned two sequels: Spectrobes: Beyond the Portals, also on the Nintendo DS, and Spectrobes: Origins on the Wii home console. 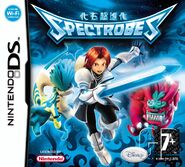 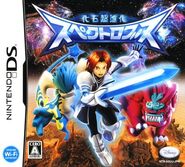 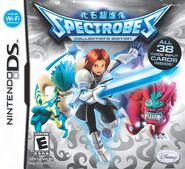 North American front and back box art.
Add a photo to this gallery
Retrieved from "https://spectrobes.fandom.com/wiki/Spectrobes?oldid=23246"
Community content is available under CC-BY-SA unless otherwise noted.