It has been several months since Rallen defeated the Krawl in Nanairo, and the galaxy has enjoyed a time of peace. However, the Krawl have begun to strike again, this time led by four elite Krawl called the High Krawl. In addition, one of the High Krawl attacks the Ancient Starship, knocking away Aldous, who was studying on-board, and commandeering it. Both Maja and Aldous battle, and there is an explosion on the bridge as the ship flies through a portal. Now Rallen must locate the missing Aldous and defeat the Krawl once again.

The gameplay of Spectrobes: Beyond the Portals has been changed greatly from the first installment. In addition to full 3D visuals, the game also features a different camera angle, facing behind rather than overhead; while the camera cannot be controlled, pressing L centers it behind Rallen. Additionally, instead of using both screens to display the action, the touch screen acts as the action screen, while the top screen displays things such as statuses, maps, and other HUD elements. Pressing the X button at any point on the overworld accesses the Prizmod menu, in which the player can see their current objective, swap equipment, check on and use items, and switch the currently active Spectrobes with ones in the backup slots.

After all the Krawl Vortexes have been cleared in an area Rallen's Child Spectrobe emerges, allowing the player to search for and excavate buried objects by pressing Y or by tapping it on the touch screen. There are four types of objects to excavate: Minerals, Fossils, Cubes, and the newly added Mystery Stones, all of which are denoted on the overworld by their own unique colors (blue, yellow, rainbow, and pink, respectively). The variety in minerals has also changed, no longer being focused on Minergy provisions rather on Property. An excavation can be started by walking into the location of the mineral or tapping its location on the touch screen. The excavation system has also been changed, in that the player only has one standard drill, and that there are different environments to excavate in, requiring different tools for each (e.g. The ice planet Hyoga requires the Fire Drill in order to melt the ice over the soil and rock to drill normally).

The game also features more locations than the previous game, which require having to travel through portals to reach different systems with new planets. When traveling through portals to different galaxies, the player can play a minigame which involves having to steer clear of asteroids and reaching the end in the fastest time. However, it is impossible to visit Himuro and Meido, like in Spectrobes 1, but that doesn't mean that the game is short of adventure. The player can also customize their ship for this by visiting Kollin's outer ring.

The combat system of this title has also been changed. In the first game, the player controls both Rallen and the Spectrobes in battle; in this title, the player controls Rallen on the overworld, battling Krawl Dust, while the player battles using a pair of Spectrobes in battles in Krawl Vortexes. When fighting as Rallen, the player can attack using either the sword with the A button, the blaster with the Y button, and the glove with the B button. Additional weapons and outfits can be bought at the store. Pressing the R button locks on to a target; the camera stays focused on that target until it is defeated, and the target can be switched to a different Krawl Dust by pressing R again. The lock-on can be canceled by pressing L.

When battling as the Spectrobes, rather than controlling both Spectrobes at the same time, only one Spectrobe can be controlled at a time; the player can switch between which Spectrobe to control by pressing the X button, and both are able to move independent of the other. Pressing A causes the Spectrobe to preform its normal attack. Attacking fills up the CH Gauge, which when filled allows the player to press one of the buttons to perform two different types of attacks. Pressing B causes a Spectrobe to preform its CH Attack, a more powerful attack, while pressing Y preforms a Combination Attack, which involves both Spectrobes combining their Properties to perform an even more powerful attack. Pressing Y while the CH Gauge is full next to a defeated Spectrobe revives it. In addition, when encountering a Krawl Vortex, the vortex is color-coded, allowing the player to see what Property the Krawl are and prepare accordingly.

Later in the game, Jeena will be required to access certain areas. Jeena does not battle or search like Rallen; instead, she can access specific totems that lock certain areas for Rallen. The minigame to break the lock is a puzzle game that involves tapping the Property emblems on the touch screen to match them all to the one given.

Spectrobes: Beyond the Portals has online features accessible through the Nintendo Wi-Fi Connection service. Not only are players able to access the Upload and Download features from the previous title but also Wi-Fi Battle and Wi-Fi Market features. With Wi-Fi Battle, the player has the option to battle strangers or friends worldwide; in the case of the latter, the player must have their friend code registered to their game. The Wi-Fi Market allows players to buy Spectrobes from other players and sell them on the marketplace for fixed prices. As Nintendo have discontinued the Nintendo Wi-Fi Connection service as of May 20, 2014, these features are no longer accessible.

The game also features connectivity to DGamer, a social network platform by Disney, and is one of the first titles compatible with the DGamer service. Spectrobes: Beyond the Portals features a number of achievements that carry over to the player's DGamer account, which unlock clothing items that can be equipped to their avatar.

Compared to Spectrobes, Beyond the Portals critically received mostly mixed to positive reception. The game currently holds a 70 metascore on Metacritic[1], and 72.48% on GameRankings[2]. Jack Derives of IGN gave the game an 8 out of 10, stating that, "It takes everything that was good about Spectrobes (and everything was not that good) and makes it better, creating an impressive, though still not ultimate, monster battler."

Spectrobes: Beyond the Portals was initially revealed to the public at E3 2007, under the working title Spectrobes II[3], which also slated the game for a 2008 release. Closer to release, the game's official subtitle was revealed, as well as several more details about the game, including Wi-Fi capabilities, new Spectrobes, and new battle features.[4]

In developing Beyond the Portals, producer Kentaro Hisai noted that development was much smoother than the previous game, as more people were able to work on the game and the Japanese and American teams were able to work better together.[5] To collect data for improvement, the team began by analyzing the original game themselves and figuring out what could be improved, then by collecting player feedback by testing the new game, both with players of the original game and new players.[5]

As the first game did not sell as well as expected in Japan, the team conducted much research before release to improve communicating the concept of the game; according to Tim FitzRandolph, Disney's plan was to "relaunch" the franchise in Japan.[5] 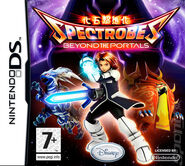 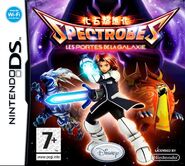 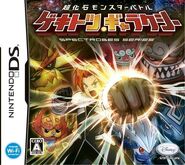 Japanese poster
Add a photo to this gallery

Retrieved from "https://spectrobes.fandom.com/wiki/Spectrobes:_Beyond_the_Portals?oldid=23910"
Community content is available under CC-BY-SA unless otherwise noted.