Spectrobes was a single-player mobile game based on the Java (J2ME) platform. It was created by the vendor Living Mobile, which had already worked on several other Disney Java game titles, and published on the iTunes Store for iOS devices. As of October 8th, 2015, the game is no longer available for download.

At an unknown point of time in the Nanairo galaxy, Rallen recovers his stolen Prizmod from a band of "space pirates" but is shocked to find that only one Spectrobe is still inside - Komainu. Jeena then agrees to help him find his missing Spectrobes while stopping the pirates as it is revealed that they have "some sort of connection to the Krawl". As the game progresses, the duo learn the space pirates' plan to send Spectrobes through a portal, with no way of returning. Fearing for their safety, Rallen stages a final battle with the pirates and wins. Peace is restored to the galaxy.

The game combined the mechanics of tile-matching puzzle games with an adventure story. Moves are made by dragging rows and columns, eliminating empty squares; when three or more of the same minerals are matched linearly, they disappear. There are two main styles of playing:

Here, the objective is to fill up four meters at the bottom of the screen before time is up. The first three meters correspond to the type of mineral on the screen, and a fourth meter (the Spectrobe meter) fills up when the other three are full. The round ends when the fourth meter is filled, and a new Spectrobe will join the player's team. The game ends in failure if the time is up before the meters are filled, which is 2 minutes on average.

At the end of each round, the attributes of the Spectrobe the player used will increase permanently depending on his or her performance.

Before starting the game, players get to choose which Spectrobe they want to use against an enemy Krawl. Type matching is a crucial part of the game; if the player uses a "matching" Spectrobe against a Krawl, damage taken is significantly reduced during gameplay. In the game, mineral matching will fill up different meters - red and yellow minerals fill up the "Strength" and "Light Energy" meters respectively, both of which unleash attacks when full, and green minerals replenish a Spectrobe's HP. The round ends when either party's green meter is completely depleted.

Choosing the "Start Game" option on the main screen will give 5 modes of play:

Initially, Rallen has only a Komainu to work with, and will get new Spectrobes as the game progresses.

Three powerups can be awarded for performing three clears in a single move. They are:

In addition, if the player makes 5 clears in a single move, two squares appear that do not give any boosts. They are: 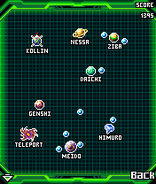 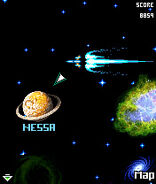 Add a photo to this gallery
Retrieved from "https://spectrobes.fandom.com/wiki/Spectrobes_(mobile_game)?oldid=22832"
Community content is available under CC-BY-SA unless otherwise noted.