Spectrobes is a science fiction action role-playing video game series owned by Disney Interactive Studios. Originally starting with the Nintendo DS game Spectrobes in 2007, the series has since spawned two sequels to the original game, books, a short web video series, and a mobile game. According to Disney Interactive, Spectrobes series is the first original intellectual property owned by the studio.

The series primarily takes place in the Nanairo galaxy, featuring protagonists Rallen and Jeena, members of the Nanairo Planetary Patrol. The two of them must use the power of the titular Spectrobes, the creatures of the light, to defend the universe from the threat of Krux and his army of Krawl, the creatures of darkness, and prevent them from destroying it.

The concept for Spectrobes was presented by Fil Barlow and Helen Maier in 2004, who were asked by Disney to create an anime-style "Pokémon killer"[1]. The concept of the game was developed by Barlow on the spot while presenting to his contact, rather than presenting an existing idea[2]. The concept itself was in development for five years[3], and was originally intended to be a PlayStation 3 title.[1]

The gist of the game involves creatures called Spectrobes being released over the terrain of Jeena's homeworld after the villanious "Kroll" attack "Rallan"'s spaceship as he lies in stasis. The aforementioned Spectrobes, creatures made of different colors of light split off from white light, compete with indigenous animals, driving many of them to extinction. Spectrobes could also exist in mutated forms, inflicted by the Kroll. The term "Spectrobe" was a portmanteau of the terms "spectrum" and "microbe", an indication of their synthetic nature.[4]

After working on designs for the original characters, the intellectual property was bought over by Buena Vista Games and given to Disney Interactive Studios, the producer being Kentaro Hisai. During the development process the concepts and character and creature designs were significantly overhauled. Finally, three years later, the first game was released for Nintendo DS. 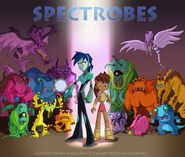 Concept art showing the original designs for "Rallan", Jeena, and the Spectrobes. 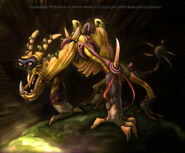 Concept art showing a Spectrobe mutated by a "Kroll".

Concept art for one of the "Kroll" creatures.

The Spectrobes games are the primary form of Spectrobes media, developed by both Jupiter and Genki. There are currently three games in the series, two released on Nintendo's Nintendo DS handheld system, and one released on the Wii home console.

Released in 2007 on the DS, Spectrobes is the first game in the series. The game involves the player digging and excavating Spectrobes to battle Krawl with. The player mostly controls Rallen, though in battle the shoulder buttons are used to attack with the Spectrobes.

In the game, Nanairo Planetary Patrol members Rallen and Jeena investigating a crash-landed object on Daichi, but while Rallen is investigating, he is attacked by a purple vortex. However, having obtained an object called a Prizmod, creatures called Spectrobes appear and aid him in the battle. After defeating the enemies, the pod is returned to their ship, where it opens, releasing a man named Aldous, explaining that he is from the destroyed Giorna system and that he is seeking the Spectrobes to fight the Krawl, but realizes that he is too late. Now, it is up to Rallen to awaken the Spectrobes and defeat the Krawl before it is too late.

Spectrobes: Beyond the Portals is the second game in the Spectrobes series, released in 2008 also for the Nintendo DS. The game has a deeper plot than the original, featuring the Ancient Ship being stolen and Aldous going missing and trying to find him, as well as the four High Krawl appearing and destroying towers around the Nanairo system, opening portals to send Krawl through to destroy it. The gameplay is also different from the original, having two Spectrobes to battle the Krawl with, controlling one while the other is computer-controlled, instead of controlling both Spectrobes and Rallen at the same time.

The third game in the franchise, Spectrobes: Origins is the only game to be released on a home console rather than a handheld like its predecessors. The game's story involves Rallen and Jeena attempting to save the Kaio system from the threat of the Krawl, while discovering things about the former Spectrobe Master and the past of Commander Grant. The gameplay is also different, featuring real-time battles involving the player controlling Rallen and either the computer or a second player controlling a Spectrobe. However, the game still involves having to dig up Spectrobes and evolve and train them to battle.

Also spun off from the games is a book series, written by Ned Lerr and published by Disney Press. Three books from the series have been released; a fourth was published, but never publicly released. Except for the third, the books each have their own original stories while using the same characters and concepts from the games.

In addition to the games normally in the series, the series has also spawned a mobile game, developed by Living Mobile for cellular devices. The game involves Rallen having recently recovered his Prizmod from space pirates, only to discover that all his Spectrobes are missing, with the exception of Komainu; he then sets off to stop the Space Pirates, as they are connected with the Krawl. Gameplay consists of a typical puzzle game, having to match different colored crystals to train and battle, each with their own effects.

There was a short three-part manga that was published in a Japanese educational magazine aimed towards fourth graders known as Shougaku Yonensei (小学四年生). In addition, a wordless comic was released by "3DMedia Toonz!", based on the beginning events of the first game.

Rallen is the primary protagonist of the Spectrobes franchise. He is a Junior Officer for the Nanairo Planetary Patrol and a Spectrobe Master. Rallen is very laid-back, not taking his job very seriously, but is very passionate during battle and is willing to fight to defeat the Krawl. Rallen first finds the Spectrobes when investigating a crash site on the planet Daichi. There, he discovers the Prizmod, but is attacked by the Krawl. After this encounter, Rallen realizes that it is now his job to use the Spectrobes to keep the Krawl from destroying everything.

Jeena is Rallen's partner, and the secondary protagonist of the series. She is more cautious than Rallen, as well as taking her position as an NPP officer more seriously. She is also more technical-savvy than he is, being able to fix and build complex technology. For the first two games, she mostly stays in the ship, providing Rallen advice from there. However, Spectrobes: Origins has her as one of the two playable characters alongside Rallen.

Aldous is a former Spectrobe Master, and the only known survivor from the Giorna star system, destroyed sixteen years prior to the events of the first game. He is very clever and skilled, possessing a vast knowledge on the Spectrobes and Krawl. In an attempt to defend the Giorna system from the Krawl, Aldous took a ship to find the Nanairo system, but ended up crash-landing on Daichi, surviving inside of an escape pod. He is later awakened by Rallen and Jeena, and Aldous becomes Rallen's mentor, giving him his vast knowledge on the Spectrobes.

Commander Grant is the head of the Nanairo Planetary Patrol. Originally an officer like Rallen, Grant at one point crash-landed on Wyterra in the Kaio star system. It was here that he developed a friendship with Krux and Kamtoga. However, after discovering a fluid that could grow Krawl, Krux betrayed him, knocking him and out and sending him back to the Nanairo system in an escape pod. Since then, Grant became the head of the NPP.

Krux is the leader of the Krawl, and the main antagonist of the Spectrobes franchise. Originally a Spectrobe Master from the Kaio system, he was friends with Kamtoga, working in a cave outside of Haven Village on Wyterra. After Grant crash-landed on the planet nearby, the three of them became friends, fighting off Krawl. However, after Grant found a liquid that could grow Krawl, Krux decided that he could use the liquid on himself and become powerful enough to permanently destroy the Krawl. However, after using the liquid on himself, he became a half-Krawl/half-human hybrid, his mind becoming twisted as well. Since then, he has become the leader of the Krawl, desiring to destroy everything.

Community content is available under CC-BY-SA unless otherwise noted.
Advertisement