Spikanor is a hedgehog-like Spectrobe that is basically a very beefed-up version of Spikan. Its body is covered in fur, and it has three very sharp, very long, golden claws on each hand/paw. Its whole body seems to be an arsenal of weapons. Its trademark weapon can be found at the end of its tail. At the end of this Spectrobe's tail is a large and spiky mace.

When battling, Spikanor uses his claws and mace-like tail as a powerful combination in close range combat. It has a unique fighting style where it likes to swing its body weight around to crush enemies.

Like in other media Spikanor was originally Spikan, but was evolved after Rallen gave him an Evolve Mineral during a battle with a large hoard of Krawl. He later appears alongside Rallen on Genshi to battle Krawl and is heavily wounded during the battle, but is saved after Aoba and Danapix use their Combination Attack to defeat the remaining Krawl.

Spikanor's attitude as a battle partner was significantly explained in the novel Rise of the Ancient, in which it displays two traits: Firstly, when Rallen orders his Spikanor to watch over Komainu perched on its back, it nuzzles the Child Form gently with its nose,[1] showing an ability to care for Child Forms. Secondly, it limped into Rallen's direction after being rammed into a hill during a battle on Ziba,[2] instead of choosing to phase back into the Prizmod as Zozanero did, showing that it is loyal even in dire times.

As with all the other Spectrobes in the book, Spikanor is masculine and is referred to as "he".

In the Spectrobes video series, it is shown that Rallen's Spikan had evolved into Spikanor in episode 10. Rallen, Spikanor, and Zozanero defeat the masses of Krawl present on Meido, but when facing the boss Krawl their attacks do not work on it, and the two Spectrobes are instantly defeated by a beam of light fired by the Krawl (which Rallen successfully dodges).

Stats taken from the official BradyGames Spectrobes: Beyond the Portals game guide and values seen in-game.

Artwork from Spectrobes: Beyond the Portals 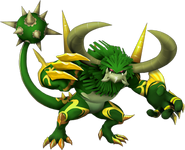 Model from Spectrobes: Beyond the Portals 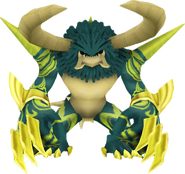 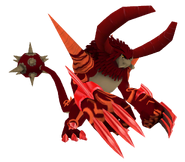 In the tenth Webisode, The Last Stand
Add a photo to this gallery

Retrieved from "https://spectrobes.fandom.com/wiki/Spikanor?oldid=24189"
Community content is available under CC-BY-SA unless otherwise noted.